Skip to content
A very nice and time saving feature of the Bash shell is that it has many ways for editing and running previous commands in Linux and Unix, but remember sometimes it does not work automatically and then you have to give the command bash in command prompt to let shell come in that mode. The following are some methods by which you can execute previous command in Linux/Unix quickly.

1. Scrolling with the up and down arrow keys
2. Using Ctrl+P and Ctrl+N
3. Listing command history

Scrolling with the Up and Down Arrow Keys

You can use the up and down arrow key to scroll though your previously executed commands in bash shell.

Use Ctrl+P to display your previously entered command and use Ctrl+N to scroll back command stack.

Use the history command to display commands that have been previously entered, as shown in below example:

It will show you previously entered 3 commands, below is the example:

To run any command from above list, type an exclamation mark followed by the history number eg. to run the first command of the list which is having 125 number, do the following: 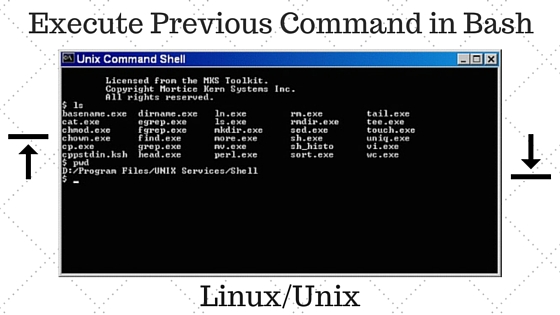