Skip to content
SYSTEM.MESSAGE_LEVEL is used to control the messages that end users see when they use the Oracle Form's application. You can control to not to display simple warning messages or even error messages to display to users. The following  are message severity levels: 0, 5, 10, 15, 20, or 25. The default value is 0.
SYSTEM.MESSAGE_LEVEL can be set to either a character string or a number. The values assigned can be any value between 0 and 25, but values lower than 0 or higher than 25 will generate an error.
There are six levels of message severity that you can affect, listed here in increasing order of severity.
0  All types of messages from the other levels of severity.
5  Reaffirms an obvious condition.
10 Indicates that the end user has made a procedural mistake.
15 Declares that the end user is attempting to perform a function for which the form is not designed.
20 Indicates a condition where the end user cannot continue an intended action due to a problem with a trigger or another outstanding condition.
25 Indicates a condition that could result in the form performing incorrectly.
>25 Indicates a message severity level that you cannot suppress via the SYSTEM.MESSAGE_LEVEL system variable.
During a Runform session, Oracle Forms suppresses all messages with a severity level that is the same or lower (less severe) than the indicated severity level.
Assign a value to the SYSTEM.MESSAGE_LEVEL system variable with standard PL/SQL syntax:
:System.Message_Level := value;
The legal values for SYSTEM.MESSAGE_LEVEL are 0, 5, 10, 15, 20,and 25. Oracle Forms does not suppress prompts or vital error messages, no matter what severity level you select.
Assume that you want Oracle Forms to display only the most severe messages (level 25). The following Pre-Form trigger suppresses all messages at levels 20 and below. :System.Message_Level := '20';
Check the following link for an example of System.Message_Level Refresh and Updating Form Screen At Run Time 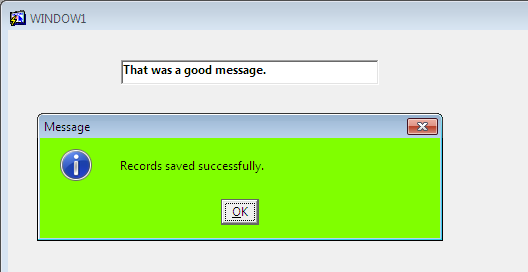